Grandaddy was there workin’ on the farm. He learned me how to work. I mean, he was a hard master too. He never did know when to sit down and rest. We had enough to eat, such as it was. It wasn’t no fine stuff. It wasn’t steak and ham much, but you could go squirrel hunting, rabbit hunting any time you wanted to. Long of this time of year, there was plenty of young rabbits. You could step out here and kill you a mess of rabbits. You know, fry ‘em up. Them’s good. I could eat about a whole one right now if I had it.

Thomas Jefferson Jarrell of Toast, North Carolina, always summoned the sense of a separate time and place; his stories and his music rang with the weighty timbre of the past. Hearing the saw of Jarrell’s bow on his old ten-dollar fiddle conjures hot Southern summer evenings, stomping feet, and good times. When I slide a CD of Jarrell’s music into my computer, the creak of his fiddling and the shout of his singing send shivers of joy and sorrow through my spine. Through the computerized crackle, I experience the hard times and small triumphs of life in a landscape of sound that feels old. For a moment, that sawing fiddle connects me to something more real than my ephemeral, commercialized present.

Jarrell made a name for himself inside and outside of the South for his fiddling, singing and banjo playing. Almost intentionally rough: squeaky, rollicking, and bellowed, to the uninitiated, Jarrell can sound literally out of tune. This rawness—straight from the skillet—was much of the draw for non-Southerners, who were responsible not just for boosting Jarrell’s popularity, but also for ensuring that this music was not forgotten on a shelf deep in the Smithsonian where Jarrell’s fiddle inhabits an archive shelf today. His fiddling reflected both the Scotch Irish ethnic background of his region and the African ancestry of the banjo and the blues. As one documentary on the region explained, “It was kept the way they learned it.”

Today we call Jarrell’s music, “old-time music”; its most popular strain is known as Round Peak music and is one of North Carolina’s most distinctive contribution to American vernacular culture. Round Peak is a hill near Mount Airy, N.C., but the genre of music encompasses musicians from nearby communities, mountain villages running along the Virginia border northwest of Winston-Salem. The music is distinguished by rhythm—the bowing of the fiddling, the flowing downstroke of banjo playing—and the raucous emotion of the singing.

Life in the greater Round Peak region was defined by the distance of the peaks and hollows of the Blue Ridge Mountains. Musicians in adjacent communities (like Galax and Mount Airy, for instance) often had a unique repertoire or a peculiar way of rendering a common tune. Indeed, old-time music thrived in thousands of distinct variations across the American South before commercial recording arrived (and, depending on your predilections, either corrupted this cornucopia of traditional music or managed to preserve a record of some of its practitioners). 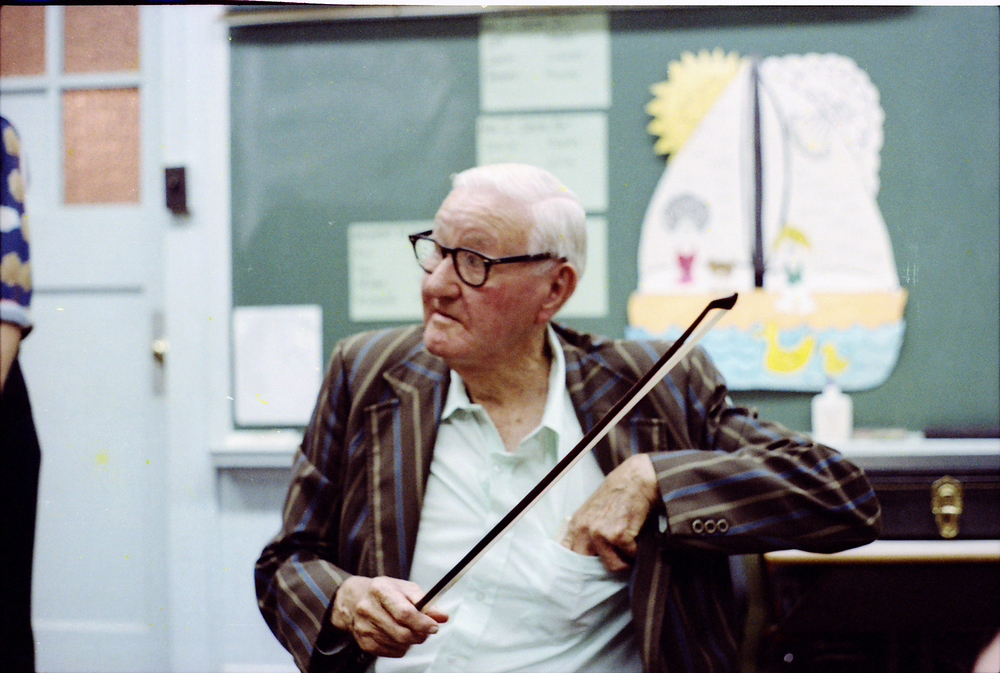 There is no Round Peak music without a story, and Jarrell was a storyteller, especially of his own past. Jarrell sought out those he saw as authentic practitioners, visiting elderly musicians so he could learn from them firsthand. Zach Payne, born in 1845 and living in Carroll County, Virginia, was one such musician. Jarrell heard so many people brag on Payne’s musicianship that he felt compelled to find him in 1920.

“I had me a half-pint of whiskey I’d made and it was really good,” Jarrell told an interviewer.

“And I went on up there… and I said, ‘Mr. Payne, I came up here, I want to hear you play the fiddle.’ ” When Payne demurred, saying he didn’t know anything about the fiddle, Jarrell asked if he ever took a drink of whiskey.

Jarrell offered him his moonshine.

“I waited till it acted on him,” he said, before saying, “I’ve heard so much talk about that fiddle, I want to hear you fiddle.” Payne countered Jarrell’s request by telling his visitor to play first.

“Well, to kind of satisfy him, I sawed off something, Sally Ann, Backstep Cindy, something, I don’t know what, and handed [the fiddle back] to him, ‘Now you play me a tune.’”

Payne proceeded to play two tunes Jarrell didn’t know. Jarrell’s retelling makes the music forgettable but the circumstances of the visit crucial. Context and place—and the feeling that these could be transacted despite and out of time—trump whatever tunes Jarrell learned from Payne. Indeed, what Jarrell felt for Payne was what so many listeners found in Jarrell.

Part of the romance of old-time music maintains that people and place are basically inseparable. Towns full of Southern fiddlers like Galax, Clifftop, and Mount Airy forged these human and imaginative connections; the space and people defined the music. The oral tradition passed between old and young, insider and outsider; it dovetailed with the music and its practitioners and tied the people to the place. Perhaps this is why old-time music evokes strong feelings, nostalgia especially, for the world that it claims to represent.

These musicians and their songs provide a link to a world first destroyed by records and the automobile, and later buried by the digital revolution and the Internet. For somebody like me, raised where the dominant culture seemed untethered to tradition or place, where McDonalds, strip malls, and television replaced whatever local cultural identity that had once thrived, there is something “authentic” in Round Peak and its music. I found the past Jarrell’s music promises so compelling that I went to Mount Airy to study banjo with—not the man himself, who is long gone—but his former student. 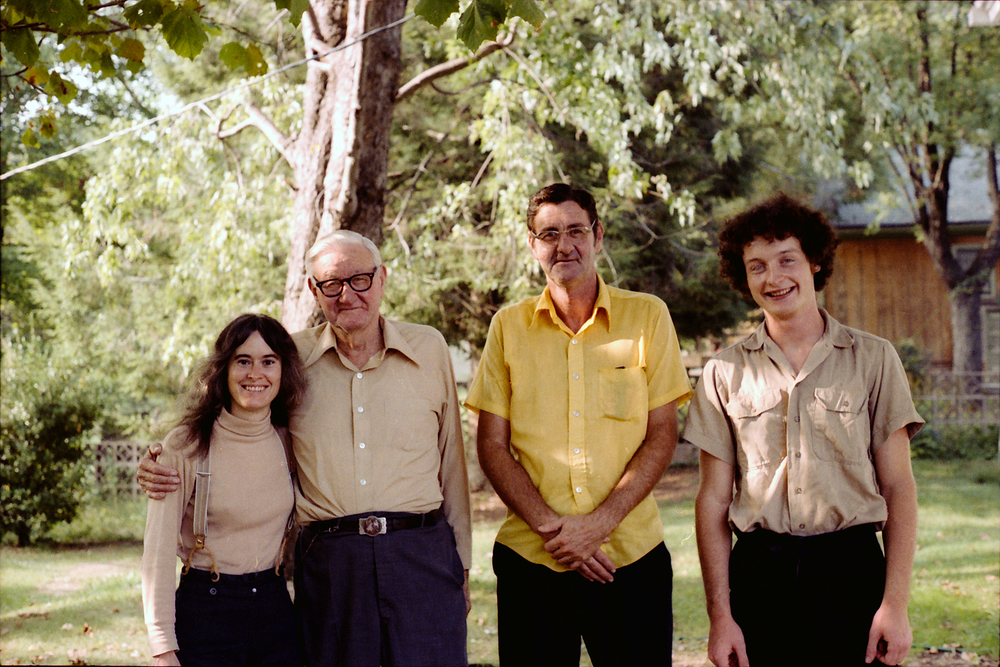 I was not alone in making the trek down to Surry County, N.C. Jarrell was warm and welcoming to a fault. Family and community members tell of coming to Jarrell’s house only to discover the living room and kitchen filled to bursting with Japanese fans. In a 1979 documentary, Jarrell sits surrounded by urban pilgrims—young musicians who traveled to this tiny town to be close to what another documentary on Jarrell described as the “essential and pure.” The old-time icon slouches in oddly matched and ill-fitting suits, recalls his upbringing, and plays tunes. On the wall hang antique photographs of rural Southern life. One fiddler, Rena Rubin, recalled, “When I used to visit Tommy Jarrell back in those days, I felt like I was truly sitting at the holy lotus feet of my fiddle guru.”

Jarrell “never worked as a professional, never drove a car, never even owned a telephone” explains the musician David Holt, as if these were the credentials for being a true old-time musician. The Brooklyn-born banjo player Hank Sapoznik noted that he feels “bad for people who never made the pilgrimage, not that they can't play, but I feel if you don't meet the people who made the music, look into their eyes and have a tune with them… then the depth of what is being played is no deeper than the thickness of the record you learned it off of.”

My own affection for Jarrell’s music is certainly enhanced by all those facets of his life. Indeed, I am unceasingly delighted by the fact that without a driver’s license, Jarrell drove a motor grader for the state of North Carolina for over forty years. When I first heard Tommy Jarrell and Fred Cockerham play, I thought that Round Peak must be at the opposite side of the galaxy. Jarrell, the highway grader, who wasn’t even known outside this isolated community until the 1960s, seemed to embody everything I loved (and romanticized) about the South.

As a Yankee whose closest taste of culture was the atheistic penury of New England preppie-dom, I imagine the opposite of my upbringing when I hear Jarrell play. In his fiddling, in his stories, in the timbre of his voice, I hear the passionate, wild messiness of life. I hear people who worked hard and celebrated harder, people who came up with the most amazing ways of expressing how they did those things. The joy of the music is impossible to deny—it is designed to make you dance. I can picture a whole world: the Mason jar of moonshine passed around as a fiddler saws off another tune, until another round and another tune. Old-time North Carolina.

But I am just imagining this.

We of course can’t ever really know what “old-time” North Carolina was really like. The past, particularly the sounds and feelings of a moment, is fundamentally irretrievable. So when we hear old-time music and we feel ourselves transported, the conjuring must be a greater part us than it is the music. Indeed, as a historian, I remember that North Carolina, particularly in Jarrell’s lifetime, was not just country characters, fiddle tunes and dancing. White people regularly lynched Black people during Jarrell’s lifetime. Many people, White and Black, were economically and socially oppressed. No matter how jaunty Jarrell’s version of “Cotton Eyed Joe,” the lyrics “Daddy had a nigger called Cotton Eyed Joe” should startle us out of our old-time reverie. Somewhere in all the romance is a historical reality. But like a flag or a patch of soil, music allows us to read an infinite number of pasts, selectively embellished and conjured. Old-time North Carolina was many things—poor, racist and violent, to be sure—and Jarrell’s music was part of it.

It is easy to decouple Jarrell’s music, his persona and his stories from that dark history. For his fans, the music floats above the rest all the same, promising to be the real thing. Essential. Pure.

Later in his life, Jarrell visited Washington D.C. to play two Stradivarius violins. On one, he runs through ‘Cotton Eyed Joe’ and then announces he does not like it nearly as much as his ten-dollar fiddle.

They don’t make them like Jarrell anymore. Maybe they never did.

Why this, why now?

Founding member of Black Workers for Justice Ajamu Dillahunt looks at Moral Mondays and says, "This is it."

We return then to the bleached the broken / sands and hear again an echo learned is lost.