One of the men arrested in Edwards, Mississippi. Photo still from KJTV video.

We walked into the courthouse in Jackson, Mississippi just in time to see them move from behind a closed door and into the main hallway. As we passed through security, they walked single file in jumpsuits, shoulders slumped, chains clanging around their wrists and ankles. By the time we reached the courtroom, the nine young men, ages 22 to 40, sat awaiting the grand jury. Immigrants from Mexico and Central America, they stood accused of offering fraudulent documents when they applied for positions at a dairy plant down the road in a small town called Edwards. After working at the facility for months, the men were arrested in late May 2015 during a workplace raid designed to identify and apprehend undocumented immigrants.

Immigration has long been a contentious issue in the United States, but until two decades ago, its daily realities were unknown in places like Mississippi which had never been home to large non-citizen populations. However, between 1990 and 2010, things changed, and they changed dramatically. As the foreign-born population stagnated in traditional destinations like California and New York, the immigrant population skyrocketed as much as 200 percent in places like Mississippi, South Carolina, and Georgia. Large cadres of Latino immigrants, mostly undocumented, arrived in the region to fill the multitude of job openings in the construction and agriculture industries. Many employers and politicians welcomed these new arrivals with open arms, eager to bear the fiscals fruits of increased productivity and sales. And bear the fruits they did, thanks in large part to exploitative labor practices. 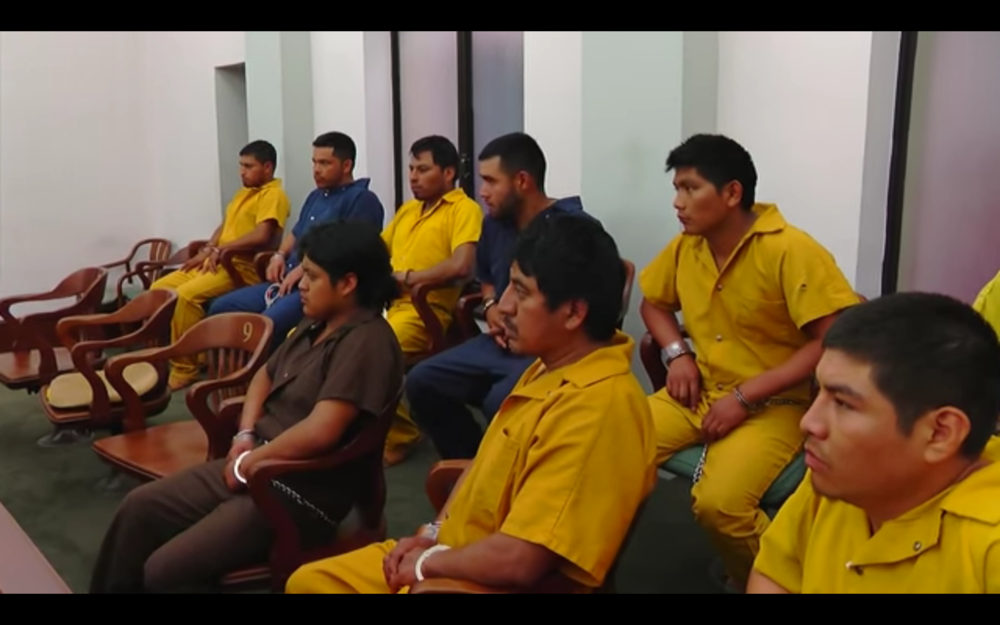 The nine men arrested in Edwards during their bail hearing. Still from KJTV video.

Aware that their undocumented employees would be too fearful of authorities to report abusive work conditions, employers have generally paid immigrants subpar wages and forced them to work without standard health and safety measures in place. At the same time, federal and local lawmakers have enacted statutes to deny these newcomers access to public education, social programs, and health services. In 2013 alone, 45 states and the District of Columbia enacted 184 laws and adopted 253 resolutions related to immigration. These policy initiatives have fueled mounting anti-immigrant sentiment across the nation while forcing immigrants to live in a precarious state, constantly fearful of persecution.

Undocumented workers in the South and elsewhere have not only lived in the shadows and worked in dangerous underpaid jobs, they have done so under constant fear of detection and deportation. The raid in Edwards, Mississippi this year was just one of over 7,000 around the country in the last seven years. The largest of these occurred not in Arizona, California, or New York – places where immigration has long be a public issue – but at an electrical equipment factory in Laurel, Mississippi. It resulted in the arrest of nearly 600 Latino workers.

The questions in these raids may seem clear cut. Did the arrested workers provide false documents when they applied for their jobs? Did they engage in identity theft, buying the social security numbers of deceased individuals and using them to defraud an employer? In the eyes of many, a yes answer to either question should render a guilty verdict, resulting in prison time and deportation. End of story. But that conclusion belies a far more complicated reality. These raids encapsulate the tangled politics of immigration in the contemporary South, a region harnessed by its racial past and grappling with a new present.

The on-going trial of these nine dairy employees in Jackson lays bare the complex political, economic, and racial stakes of immigration in the region. The paperwork audit that led to their arrest was initiated by the Attorney General’s office in concert with the federal office of Immigration and Customs Enforcement (ICE). Despite a history of being sympathetic to immigrants, the Attorney General, Jim Hood, a Democrat facing a contentious reelection campaign in an overwhelmingly Republican state, avidly prosecuted the men. If the Attorney General’s about-face on immigration were not enough to prompt criticism from pro-immigration corners, his decision to willfully ignore the potential role of the employer, American Dairy Co, in the debacle generated even more suspicions. Some of the men conceded that they may have used false documents to obtain employment, but observers suspected that their employer not only told them to obtain false documents but also instructed them on how to do so. This distinction is important because the charges filed against the men rest on the claim that they deceived their employer by providing false documents. If American Dairy Co knowingly assisted the men in obtaining false documents, the case against the men would crumble, and the corporation could face charges of its own. Yet the Attorney General’s office never explored the possibility in its investigation. 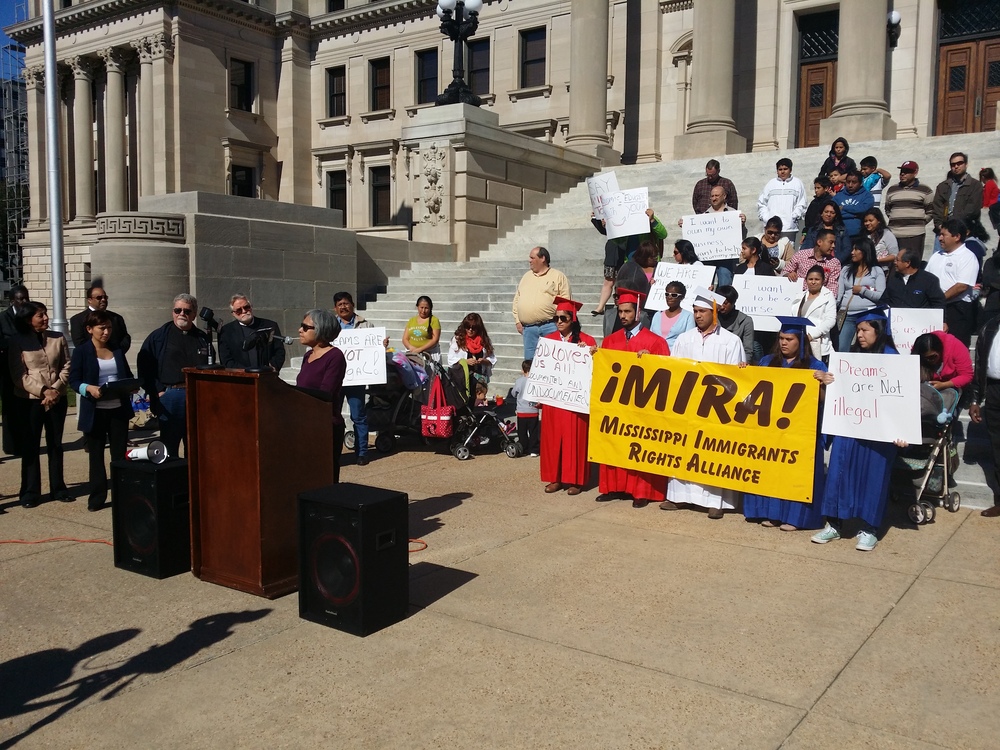 A protest in favor of immigrants rights at the Mississippi state legislature. Photo by Robert L. Reece.

The idea that American Dairy Co was complicit in this process may sound ludicrous, but the practice is actually commonplace. The most famous instance occurred in Postville, Iowa where multiple managers at a meat packing plant were convicted of helping undocumented immigrants obtain false documents. The Postville case received significant media attention, but across the country, employers routinely encourage and directly assist undocumented workers in committing identity theft. Workers get jobs; employers get a cheap and pliable labor force. If and when they get caught, employers can rest at relative ease knowing the workers, not they, will bear the burden of the offense. In the Edwards case, the Attorney General’s office went after workers at a plant that was already slated to close, meaning corporate employees were no longer easily available to interview and the company would face little fallout from the arrests. The pickings were easy. The chance of backlash was slim.

The Attorney General’s choice of Patrick Beasley as prosecuting attorney also raised eyebrows. An African-American man with a record of supporting immigration, Beasley was now tasked with prosecuting a group of Latino immigrants in a state where African-American leaders broadly and vocally declare protecting immigrant rights a “Black” issue. For immigration activists, the Attorney General’s choice of Beasley appeared to be an effort to undermine the Mississippi’s influential Black-Latino pro-immigrant coalition. It is possible that the timing, target, and personnel appointed in this particular case were a coincidence. But immigration supporters widely viewed these events as a strategic move by Hood to shore up votes for the coming election.

Regardless of the intentions behind the raid, its effects on the lives of those arrested were dramatic. Five of the nine men had families with young children for whom they were the main breadwinner. At least one of the men had a child with severe health issues for whom he was now unable to care thanks to his imprisonment. Moreover, when the men were apprehended and imprisoned they entered a legal system ill-equipped to represent their interests. The state of Mississippi has nearly two dozen certified court interpreters but only one actually resides within the state borders. At the grand jury, lawyers on both sides and the presiding judge appeared confused as to who had the authority to translate for the men on trial. As the day progressed, the key witness for the prosecution admitted that while the men had been read their Miranda rights upon arrest, he could not say one way or the other whether the Spanish-speaking men had actually understood their rights as read to them. Visibly appalled by this violation, the judge nonetheless announced that state law granted him no authority to declare a mistrial during a grand jury investigation. He refused bail to eight of the nine men. They remain in police custody awaiting trial.

The story of these young men and of this Attorney General is far from unique. Since its birth, this country that calls itself a “nation of immigrants” has scapegoated non-citizens for its own social and economic ills. In traditional immigrant destinations as well as in newer ones like small Mississippi towns, American politicians continue to stake their political chances on their ability to stoke nativist fires while all but ignoring the complicity of employers in immigration affairs. As a short-term strategy to win votes, these provocations may prove effective, but their long-term viability is less clear. With the country poised to become majority-minority in the coming years, old-guard politicians in these new destination states will need to reconcile their xenophobic tactics with demographic realities or lose their political bully pulpit. The children of these Mississippi immigrants are just a handful of the citizen children of immigrants likely to ponder their own personal experience with immigration enforcement when they go to the polls as adults. If elected officials cannot bring themselves to consider the human costs of immigration enforcement, their future careers depend on considering the political ones.

This piece is informed by an ongoing research project funded by the Russell Sage Foundation, the University of Notre Dame, and Wake Forest University.

The entrepreneur and the citizen

Does the lionization of social entrepreneurship leave out the messy, contested process of fighting for social change?

To catch a carp

Moon River Foods and a handful of fishers are trying to fight the Mississippi's Asian carp population—but can they turn enough of a profit to make fishing carp sustainable?