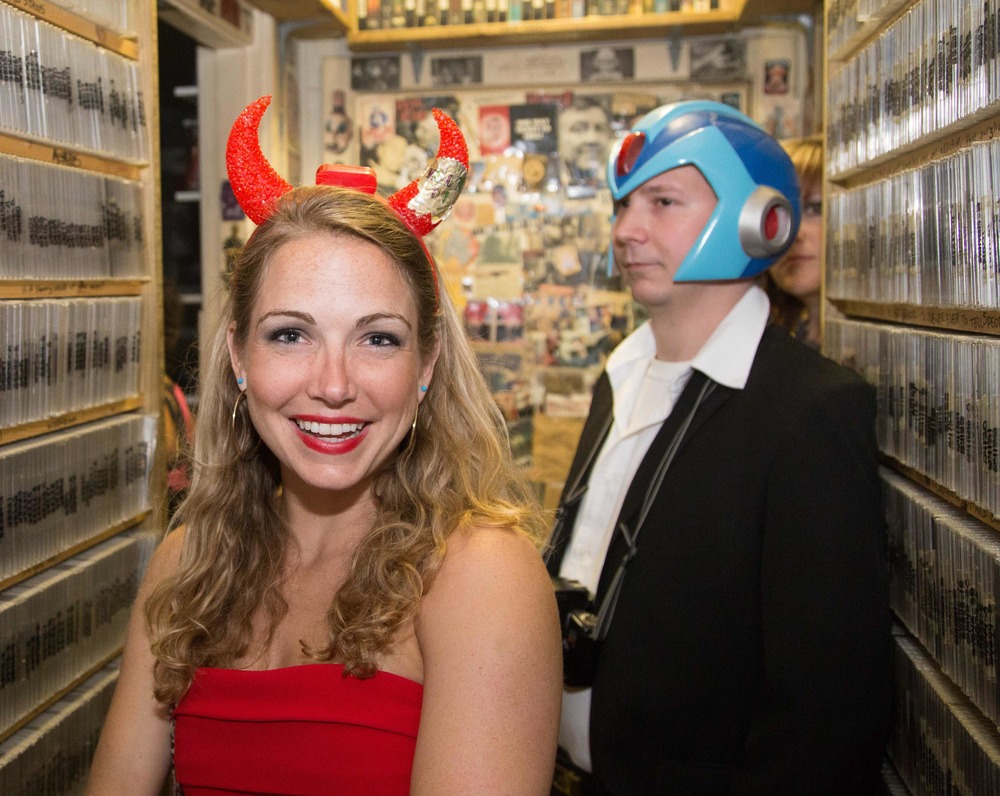 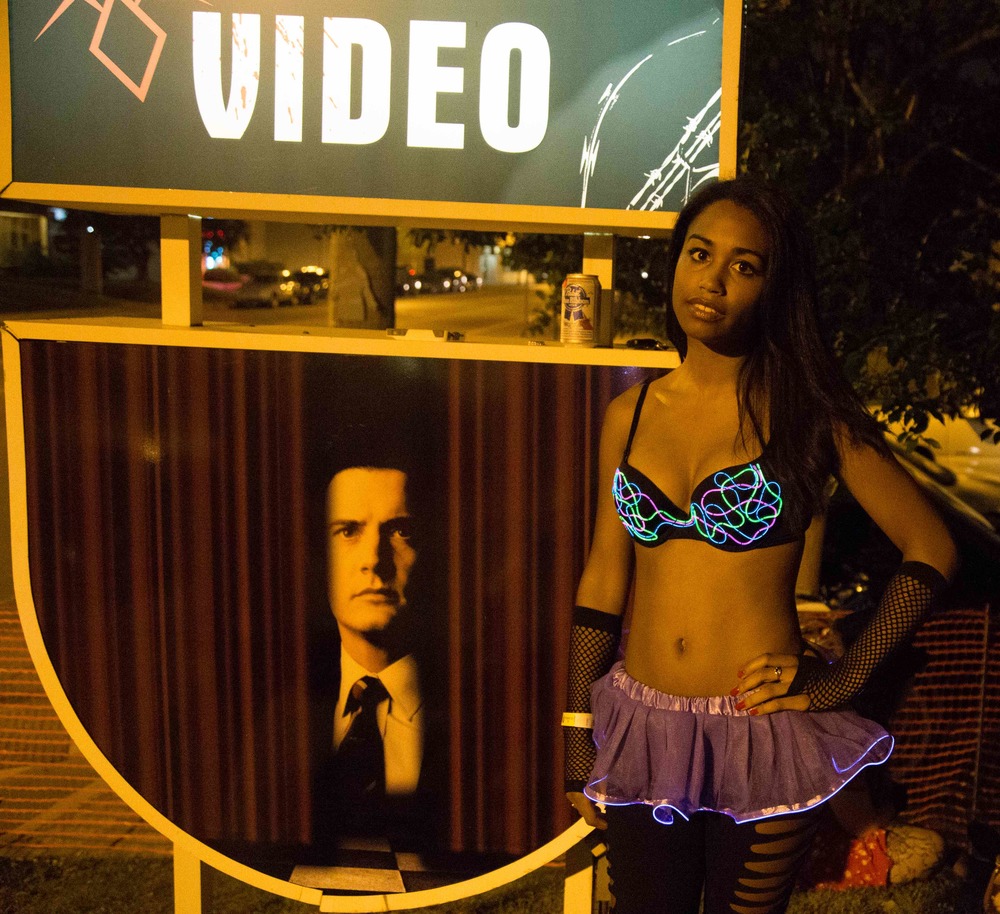 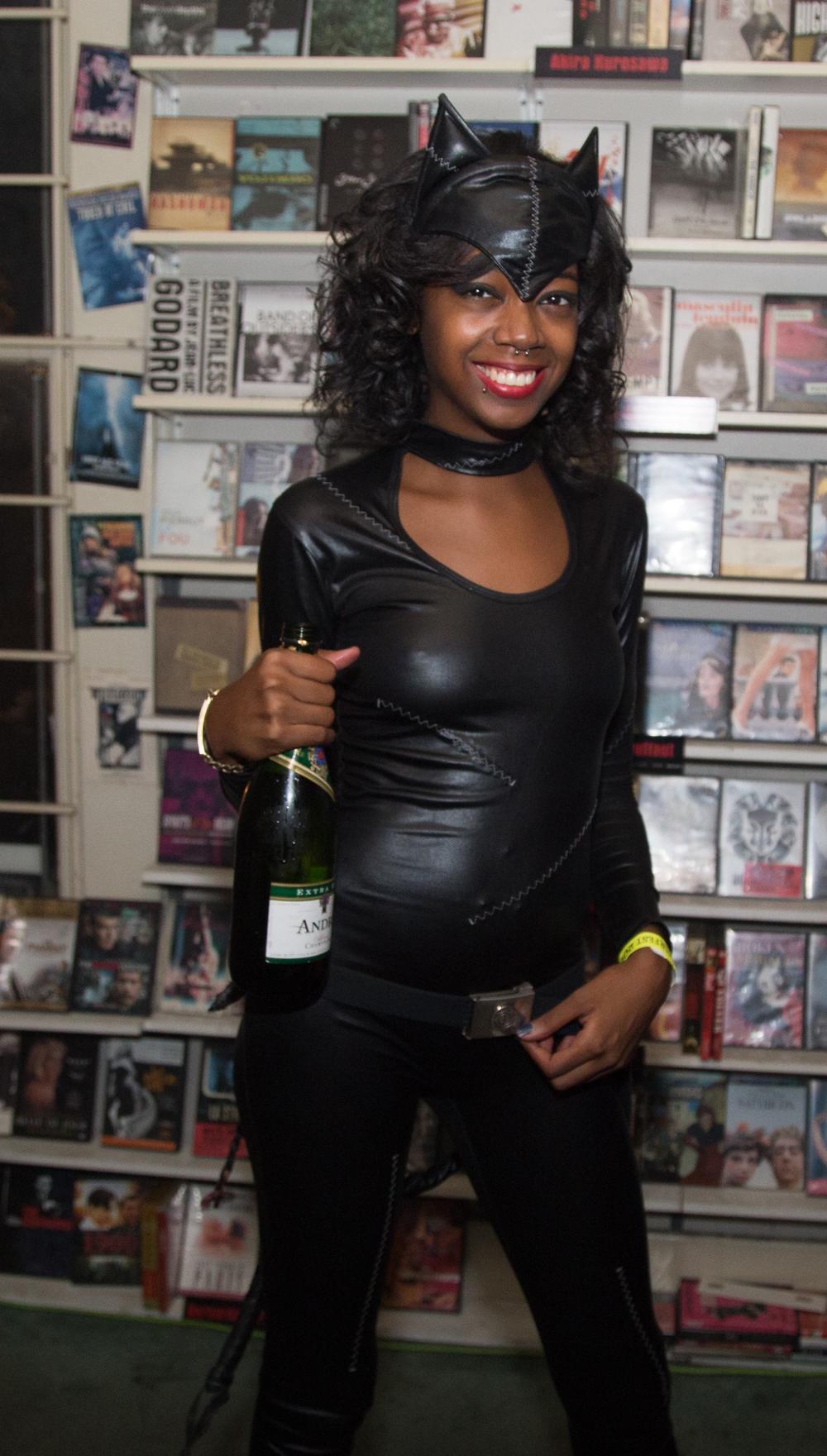 Amid the deteriorate sprawl of Memphis, Tennessee stands one of the nation’s most obstinate—and definitely weirdest—monuments to cinema: Black Lodge Video. Since the last of the major video rental titans (Blockbuster) wilted to ash in late 2013, the store’s anomalistic survival has won it the distinction of being, as one local reporter ominously heroicized: “Memphis’s last remaining video rental store!”
But really, the place is so much more.

Problem is, while the apocalyptic billing rings true enough, restricted to the microcosm of ‘local appeal,’ the truly fascinating question these hometown reporters never quite get around to exploring is: In a market dominated by considerations of convenience and instant gratification—think click-on-demand streaming video, DVDs delivered straight to your mailbox, Redbox dispensaries on every major street-corner—what is it about Black Lodge Video that is so inordinately unique customers are willing to suffer the hassle of commuting to and from a brick-and-mortar location, waiting in a checkout line, experiencing person-to-person interactions with umpteen patrons and staffers, all for the sake of a few hours entertainment?

A visit to Black Lodge Video tends to give rise to the impression the place is more freakish museum than anything deriving from the genus Blockbuster. First off, the store features a “hand curated” library of over 30,000 titles organized by director, art-movement, and historical significance, containing therein the largest physical compendium of B- and C-rate horror flicks in the nation.

Second, there is the bizarre yet strangely inviting crash-pad ambience—including Lynchian oddities of décor like rippled, purple velvet curtains lining the walls alongside customer-composed graffiti murals, and shelving units scumbled over with quotations.

And lastly: The electronica, grunge-punk, and jam-rave shows begin at midnight and frequently rage until 5 am.

“At first glance, [BLV] appears to be a sort of freakishly atavistic rental business,” explained Craig Brewer, director/writer of 2006’s Academy Award winning, Hustle & Flow. “But when you look closer, you realize the place is nothing short of an underground institution.”

Spend any amount of time hanging around the Memphis arts scene—and this is especially true for its filmmakers—and you will inevitably encounter the statement: “I didn’t go to college, I went to Black Lodge.”

“And we say that because the owners are like film professors,” said Brewer. “These guys know their cinema as well as anyone out there, and they’ve made a business of disseminating that knowledge in a way that’s fresh and applicable for both the average viewer and connoisseur alike.”

While the ‘novelty’ veneer is great for luring curious customers through the doors, what makes them return, and ultimately wins their loyalty, has everything to do with Black Lodge Video’s business model—which is less an organized strategy than a byproduct of its owners’ cinematic obsession. 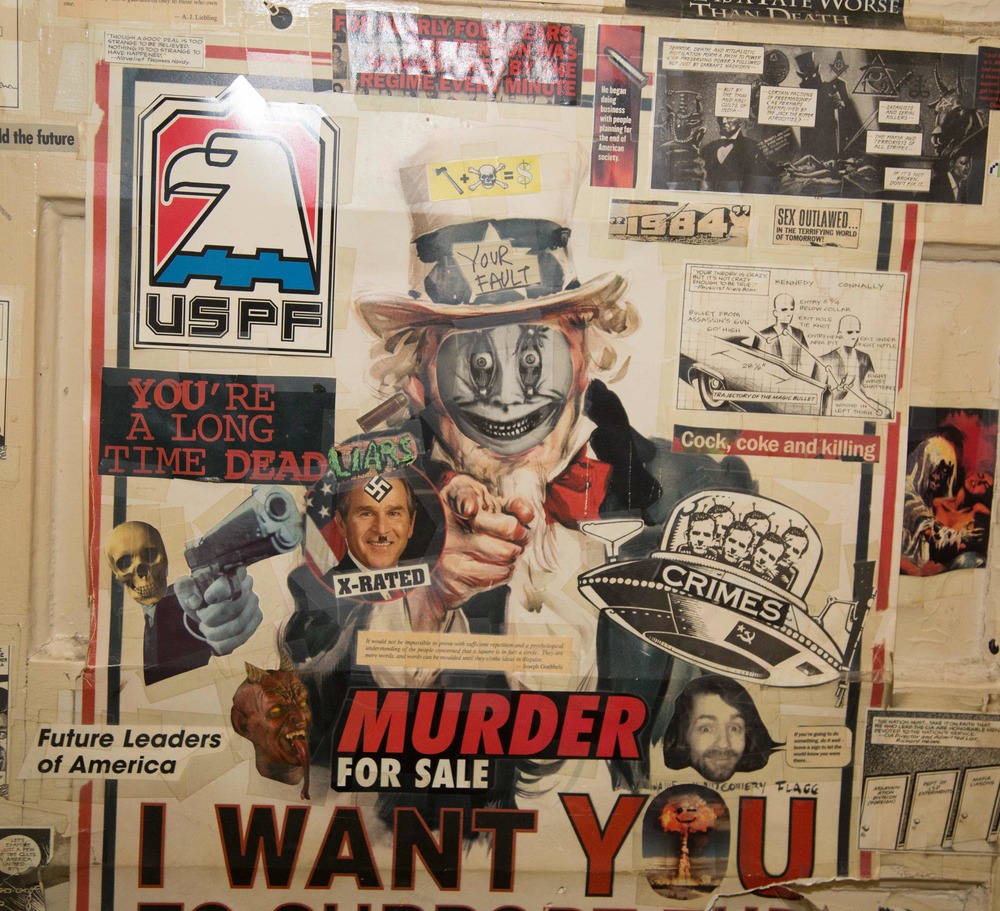 “From the moment we opened our doors back in 2000, we thought of [BLV] more as a privately owned library than an entrepreneurial endeavor,” said Matt Martin, co-owner and founder. “On the one hand, people who came in were going to watch and learn about great film. On the other, we were aware that if we wanted to grow and maintain the catalogue, we’d need paying customers. Toward the end of merging those goals into a functional enterprise, we cultivated the notion of [BLV] as a convergence point for indie film-makers and a certain kind of cinema enthusiast—”

In short, aficionados of the weird and obscure.

“Our model was atypical,” said co-founder Bryan Hogue. “We didn’t focus on new-releases, or, for that matter, Hollywood blockbusters. We were thinking in terms of an experiment in film conservation, a repository of cinematic knowledge.”

As far as tangible business practices and customer-service strategies are concerned, the philosophy translated as follows:

With BLV, as opposed to a mega-store staffed by teenagers more interested in diddling their phones than chatting about the monumental promise of, say, the then-burgeoning young director, Wes Anderson, patrons had at their disposal a pair of experts who’d lived their entire lives in pursuit of the maxim: Know thy cinema.

“You can learn a lot about a person from the movies they watch,” said Martin. “If a customer was visiting the store for the first time, I’d ask them a series of questions—top-five films, favorite directors, favorite actors, that sort of thing. Then we’d talk about what they’d said. And then, after all that, I’d walk him or her around the store and make suggestions.”

“Basically, if you visited Lodge, you were going to learn about film, no way around it,” said Memphis-based filmmaker Mike McCarty. “Mike and Bryan were determined to make that happen.”

Matt Martin, founder of Black Lodge Video, at his store.

As a result of this ultra-personalized approach, after one or two bulls-eye shattering recommendations, patrons got hooked. (Because, why would you continue to rely on an automated box with a highly limited selection when you could reap the benefit of having your movie-night personally curated by a film studies guru pulling from a library of over 30,000 films?) Meanwhile, among the Indie filmmaking scene, Martin and Hogue’s penchant for sharing their near-Faustian wealth of cinematic knowledge was earning them a reputation.

“Whenever an idea for a project began to really solidify, I’d go to the Lodge and run it by Matt,” said Brewer. “He’d listen, ask a bunch questions—aesthetic goals, genre considerations, plot-lines, philosophical allusions, or whatever—mull it over for a couple of days, then call me up: ‘Order’s ready!’ And when I came back in, he’s got this big stack of films: ‘Here’s your research.’”

But it wasn’t just Brewer.

“Matt did that for everybody,” said Memphis indie-filmmaker, J. Lazarus Hawk. “If you said you wanted to make a film, his eyes would light up. He’d take a special interest in you. He’d pick your brain, find out what, specifically, you were thinking about, and put you on a high-protein ‘diet’ of films that he thought would inspire, enrich, and inform your project.”

To further sweeten the deal, it was BLV’s policy that filmmakers (but only filmmakers) rented for free. For many an up-and-coming artist, this service was nothing short of a goldmine.

“Before the internet, it was really hard to gain access to quality art cinema,” explained local filmmaker, Morgan Jon Fox. “Even harder if you were broke. But with Lodge, you were given free reign. You got to reap the benefit of this amazing collection and run your ideas by a guy who not only really knew his stuff, but would take the time to watch your film and talk with you about it. It was a case of the proverbial kid in the candy store.”

“Early on we got pegged with this hip and tolerant, underground, but really intelligent reputation,” said Martin. “Bryan and I lived in an apartment over the store, and were sociable people [(read, party maniacs)], so, for the first few years, the place stayed open basically 24/7…. We encouraged people to sit around and talk film, philosophy, art, music, whatever.”

Soon enough, poets, writers, musicians, intellectuals, professors, comedians, thespians, street-performers, magicians—you name it—they were all coming in, hanging out, and renting movies in the process. According to Martin, it was this melting pot of diverse, passionate, and artistic personalities that gave rise to the Lodge’s notoriously creative atmosphere.

“Collaborations began to occur,” said Martin. “And, as we had all this space, people would convince us into holding events. Readings, screenings, lectures, burlesque shows, fetish parties, raves, mini hippy festivals, what have you, we were persuaded into letting someone put it on.”

Almost by accident, BLV had positioned itself as the heart of a blossoming artistic community. Patrons became tremendously loyal, propagating a view of themselves as supporting and holding membership within a unique and indispensable cultural institution.

“You could safely draw the analogy of BLV functioning as an NPR-type organization for the Memphis underground,” joked Martin. “We’re member supported, and we don’t allow ourselves to forget it.”

Indeed, the relationship ran so deep it led many of the company’s closest insiders—including McCarthy, Hawk, Fox, Brewer, Martin, Hogue, and every employee who’s ever worked there—to have the Black Lodge Video logo (a small, geometric owl) tattooed somewhere on their body.

“In reality, it’s kind of cultish,” said BLV staffer and long-term regular, Chris Bratton. “But in a good way, without any of the negativity.”

“The thing is, in a city where 90 percent of it wasn’t safe to walk through, where being gay could get you beat up, where being Black could get you persecuted, where having facial piercings or a mohawk could get you preached at about going to hell, people longed for a place where it was safe to fly their freak flag,” said Martin. “And [BLV] gave them that. What we built was an artistic community based about acceptance, openness, creativity, and, of course, a mutual interest in exquisite film.”

“The thing is, standing in a room with that many amazing works of art does something to you,” said Brewer. “You can’t help but be moved. You get overwhelmed by this immense gratitude. You find yourself wanting to thank all the people whose crazy passion made a place like Black Lodge Video possible.”

Review: Class war and the Confederacy in “Free State of Jones”

Folks of all colors have been working together to build a better South for far longer than public memory admits. In telling some of their stories. Free State of Jones is a politically important film about the Civil War and its aftermath.

Review: “Prom is the least of our worries”

Southern Rites, executive produced by John Legend, presents the kind of story of race that people who know nothing about the South want to see to confirm their own moralizing stereotypes.